And now for something completely different, a tutorial on how to make a controllable robot head. “But,” I imagine you thinking, “aren’t you an A.I. guy? Since when do you have expertise in robotics?” I don’t, and that’s why you can make one too.
(Disclaimer: I take no responsibility for accidents, damaged equipment, burnt houses, or robot apocalypses as a result of following these instructions)

What you need:
• A pan/tilt IP camera as base (around $50)
• A piece of wood for the neck, about 12x18mm, 12 cm long
• 2mm thick foam sheets for the head, available in hobby stores
• Tools: Small cross-head screwdriver, scissors and/or Stanley knife, hobby glue, fretsaw, drill, and preferably a soldering iron and metal ruler
• (Optional) some coding skills for moving the head. Otherwise you can just control the head with a smartphone app or computer mouse.

Choosing an IP camera
Before buying a camera, you’ll want to check for three things:
• Can you pan/tilt the camera through software, rather than manually?
• Is the camera’s software still available and compatible with your computer/smartphone/tablet? Install and test software from the manufacturer’s website before you buy, if possible.
• How secure is the IP camera? Some cheap brands don’t have an editable password, making it simple for anyone to see inside your home. Check for reports of problematic brands online.
The camera used in this tutorial is the Eminent Camline Pro 6325. It has Windows software, password encryption, and is easy to disassemble. There are many models with a similar build.

Safety first: Unplug the camera and make sure you are not carrying a static charge, e.g. by touching a grounded radiator.
Start by taking out the two screws in the back of the orb, this allows you to remove its front half. Unscrew the embedded rectangular circuit board, and then the round circuit board underneath it as well. Now, at either side of the orb is a small circle with Braille dots on it for grip. Twist the circle on the wiring’s side clockwise by 20 degrees to take it off. This provides a little space to gently wiggle out the thick black wire attached to the circuit board, just by a few centimetres extra. That’s all we’ll be doing with the electronics.

We’ll attach a 12cm piece of wood on the back half of the orb to mount the head on. However, the camera’s servo sticks out further than the two screw holes in the orb, as does a plastic pin on the axle during rotation. Mark their locations on the wood, then use a fretsaw to saw out enough space to clear the protruding elements with 3 millimetres to spare. Also saw a slight slant at the bottom end of the wood so it won’t touch the base when rotating. Drill two narrow screw holes in the wood to mirror those in the orb half, then screw the wood on with the two screws that we took out at the start. 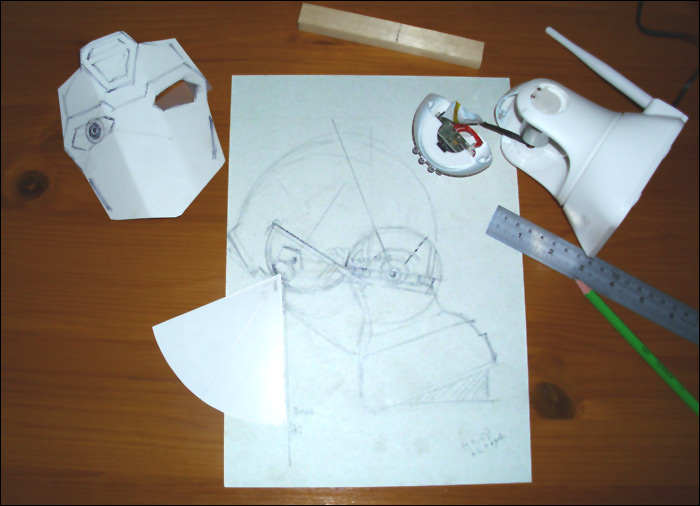 You’ll probably want to make a design of your own. I looked for inspiration in modern robotics and Transformers comic books. A fitting size would be 11 x 11 x 15cm, and a box shape is the easiest and sturdiest structure. You’ll want to keep the chin and back of the head open however, because many IP cams have a startup sequence that will swing the head around in every direction, during which the back of the head could collide with the base. So design for the maximum positions of the neck, which for the Camline Pro is 60 degrees tilt to either side. You can use the lens for an eye, but you can just as well incorporate it in the forehead or mouth. Keep the head lightweight for the servo to lift, maximum 25 grams. The design shown in this tutorial is about 14 grams.

Cut the main shapes from coloured foam sheets with scissors or a Stanley knife. I’ve chosen to have the forehead and mouthplate overlap the sheet with the eyes to create a rigid multi-layered centrepiece, as we will later connect the top of the wooden neck to this piece. The forehead piece has two long strands that will be bent backwards to form the top of the head. I put some additional flanges on the rectangular side of the head to fold like in paper craft models. Although you can also simply glue foam sheets together, folded corners are sturdier and cleaner. The flanges don’t have to be precise, it’s better to oversize them and trim the excess later.

To fold a foam sheet, take a soldering iron and gently stroke it along a metal ruler to melt a groove into the foam, then bend the foam while it’s hot so that the sides of the groove will stick together. It’s easy to burn straight through however, so practise first. It takes about 2 or 3 strokes and bends to make a full 90 degree corner.

Putting your head together

To curve foam sheets like the faceplate in this example, you can glue strips of paper or foam on the back of the sheet while holding it bent. After the glue dries (5-10 minutes), the strips will act like rebar in concrete and keep the foam from straightening back out. Whenever you glue sheets together at perpendicular angles, glue some extra slabs where they connect, to strengthen them and keep them in position. Add a broad strip of foam at the top of the head to keep the sides together, and glue the two strands that extend from the forehead onto it. Note that I made the forehead unnecessarily complicated by making a gap in it, it’s much better left closed.

Once the head is finished, make a cap out of foam sheet that fits over the tip of the neck, and glue the cap to the inside of the face at e.g. a 30 degree angle. To attach the camera lens, note that the LEDs on the circuit board are slightly bendable. This allows you to clamp a strip of foam sheet between the LEDs and the lens. Cut the strip to shape and glue it behind one eyehole, then after drying push the LEDs over it and clamp them on gently. The easiest way to make the other eye is to take a photograph of the finished eye, print it out mirrored on a piece of paper, and glue that behind the other eyehole.

This particular camera has night vision, which will suffer somewhat from obscuring the LEDs. In addition, you may want to keep the blue light sensor on the LED circuit board exposed, otherwise you’ll have to toggle night vision manually in the camera’s software.

Now you can already turn the head left, right, up and down manually through the app or software that comes with your camera, and use it to look around and speak through its built-in speaker. However, if you want to add a degree of automation, you have a few options:

1. If you are not a programmer, there is various task automation software available that can record and replay mouse clicks. You can then activate the recorded sequences to click the camera’s control buttons so as to make the head nod “yes” or shake “no”, or to re-enact a Shakespearean play if you want to go overboard.

2. If you can program, you can simulate mouse clicks on the software’s control buttons. In C++ for instance you can use the following code to press or release the mouse for Windows software, specifying mouse cursor coordinates in screen pixels:

3. For the Camline Pro 6325 specifically, you can also directly post url messages to the camera, using your programming language of choice, or pass them as parameters to the Curl executable, or even just open the url in a browser. The url must contain the local network IP address of your camera (similar to the underlined example below), which you can find through the software that comes with the camera. The end of the url specifies the direction to move in, which can be “up”, “down”, “left”, “right” and “stop”.

Have fun!
How much use you can get out of building a robot head depends on your programming skills, but at the very least it’s just as useful as a regular IP camera, but much cooler.

Let your friends in on this: